The Invisibles – Their FIRST ACT at Freedom Sounds 2018

The Invisibles from Amsterdam have taken an unusual approach by picking classic and modern pop songs, both original numbers and top hits, and dipping them into a vintage Studio One sound, circa 1963.
Following up their debut EP “First Act”, this big band of friends – some of which are well-known from other Dutch outfits – take it one step further by releasing a full album of new material in February 2018. The album will include a few covers as well. Hits like their version of Delilah, which is one of the highlights of their live performances, Once in a Lifetime, which was featured twice on Talking Heads Official’s FB page and scored thousands of likes, views and sharing, and Amara Terra Mia, an Italian classic about immigration, written by Domenico Modugno, author of the utterly famous Volare.
2018 will also mark the point when Italian-Dutch front man Enrico “Doctor” C. G. takes the band abroad for the first time. Naturally, we are honoured that they have chosen Freedom Sounds Festival to play their first-ever show in Germany. 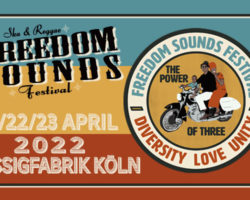 a.k.a. Herr T.: One of the three promoters of Freedom Sounds Festival, a passionate fan of Ska, Rocksteady, Reggae, Soul and all good music and bands on the planet providing you with all the information you need!